The value of a military style education for some students is well established and recognized by most educators. The inculcation of discipline, the value of giving oneself to a greater cause, the development of a selfless world view, the push toward excellence and achievement at a high level, all of these have great appeal and may be shown to be highly effective when paired with a population of students who are well equipped for this style of learning. 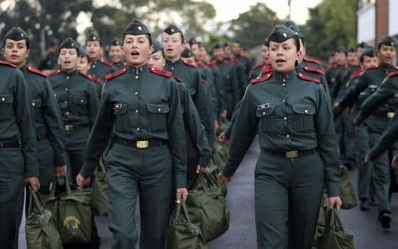 Attempts have even been made to adopt military education to public school settings. There are certainly features to be acknowledged and respected in the fast track, highly organized methods of military education. Like the factory system, the military model runs on very clear procedures that can be replicated on a large scale. Yet there are few who would maintain that military schooling would be effective or wise when applied across the board.

Hugh Price, senior fellow at the Brookings Institute, has been a major supporter of these approaches. Having observed in his own youth that peers who had little discipline in high school emerged from a few years in the armed forces “ramrod straight and full of purpose”, he wondered if this form of education could be brought to bear on at-risk populations in public schools. Experimental programs based on Price’s ideas have been created in several states and have shown some promise.

There are objections, however, including the concern that such schools could become recruiting grounds for the armed forces. In addition, even staunch advocates of military schools make it very clear that military education is not for all and may, in particular, be a poor match for teenagers with emotional challenges: “While military schools are wonderful for stable teenagers, they may only pose further problems in the progress of a struggling teenager.”

Acknowledging a school’s military orientation is only the beginning point for  an analysis of how such schools fit into our proposed continuum of student-centered education.