In religious schools, we may expect to encounter a very different conception of the role of education in a student’s life. Because there is often an essential and openly professed drive towards uniformity and the cultivation of religious values, the individual may appear to be secondary to the mission.

However, a statement of purpose for one such school, the Covenant School in Arlington, MA, reflects the synergy between values formation and acquisition of knowledge (or wisdom): “We believe wisdom is not about the control or explanation of life, but has more to do with the capacity to live life truly and well: cooperatively, not competitively; in interdependence instead of independence; and to value responsibility more highly than personal choice”. This seems to reflect what we would call a student-centered approach  to education within that small school. 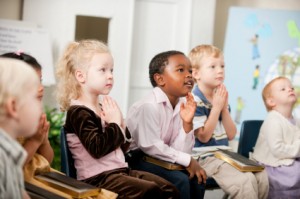 There are, of course, many religions and many types of religious schools, but in any school that rigidly bases its teachings on religious doctrine, the primary goal of education will not be the flowering of individual potential, but the inculcation of moral and spiritual values considered vital by the religion. Essentially, most religious programs would appear to have in common this goal of preserving a core set of values, and the spiritual and personal growth of the individual will be seen to rely on the development of these values.

Religious schools may be chosen by parents for many reasons which are not fundamentally religious, but in most cases, the choice is still related to values, behaviors, and practices that parents consider desirable. In this country, where Catholic schools are the most common form of religious school, the choice may have little to do with Catholicism per se and everything to do with discipline, order, and adult authority. But whether chosen for religious reasons or not, the teaching of values will be found at the heart of religious education.

Nothing in this discussion is intended as a criticism of schools with a religious orientation. Rather, the point is an attempt to discern how such schools might fit into our continuum of student-centered education.